Is Paris Bordone telling us something about the family of Charles V of Spain?

Looking at this picture something about the black page boy sends one's Afrocentric antennae tingling. You have read Codfried and seen a lot of the paintings which have lead to this post - Charles II, Charlotte Fitzroy and the Indian Page Boy. Surely the must be something in it and there surely is.

Looking at the page boy, even with his black skin against the dark background which makes it see hard to see his features clearly, one immediately notices the shape of his skull and his hairline which is very much the same as that of the knight in armor. There is definitely something here. Afrocentrics are a sharp-eyed, relentless, compulsive and obsessive lot. This one is definitely not getting away. Sooner or later the info will come in. Paris Bordone is clearly stating that the relationship between the boy and knight is a close one, difference in complexion and status not withstanding. 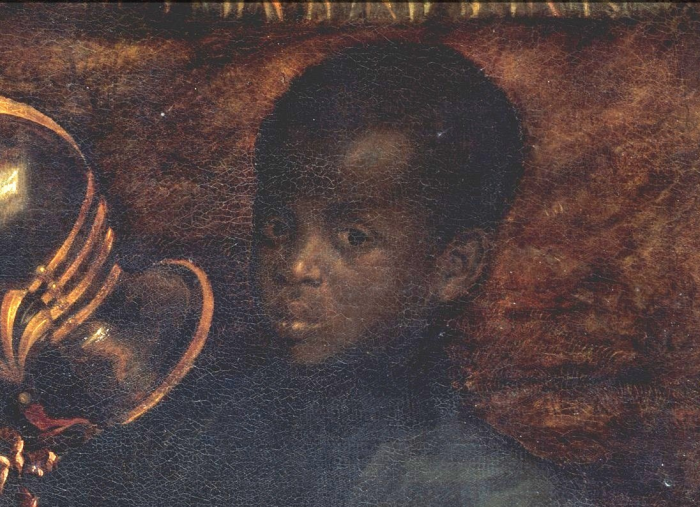 Because many pictures of Charles V display him with his head turned slightly, probably to show off his prognathism, it doesn't look like him. Some of these portraits are suggestions, allusions, rather than direct presentations of some well known personality. The black armour, the beard, and the shape of skull are suggestive. The knight here is looking rather sickly, one eye looks damaged, he appears to be leaning on the white page boy for support, and apparently dotes on him. The black page boy seems somewhat disinterested, more interested in the camera, and seems to be waiting for the job to be done so he can be relieved of the helmet he is holding.

For some reason or the other my searches lead me to a picture of Philip II. I take a look at it again and I do a double take. I look at the page boy. It IS Philip II. Very much how Phillip II would look if he was younger, and black. Philip is very much how the boy would look if he page boy was older, and his face whitened. This is one problem I have with many of these portraits. At the top of Philip II's Wikipedia he is displayed with quite white skin and blue eyes, and further down he is displayed in armour, but with much darker eyes, almost black. This combination of white skin and dark eyes, always makes me suspicious. Perhaps his eyes are blue and got dilated in the low light. Whatever. Which ever way you cut it, the similarity in the looks is just plain uncanny. 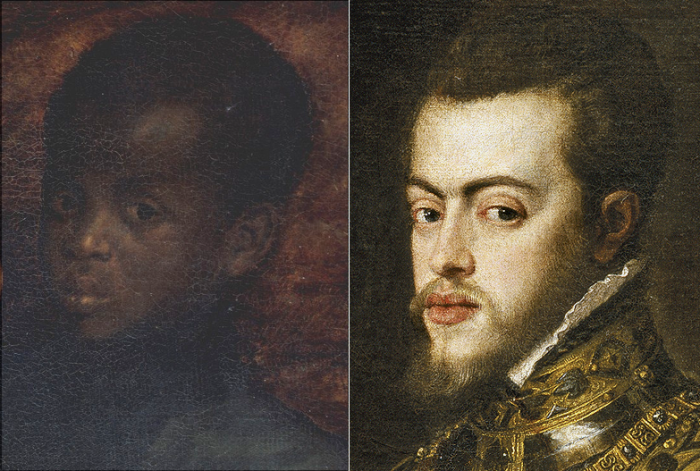 Perhaps Charles asked some contacts in Africa to get him a page boy who looked very much like is family. But was the boy born in Africa, or was he born of Africans already living in Europe?

The facts are very clear. Once you get to believe that images of European royals have been whitened, the logical conclusion is that you are looking at Philip II as a boy, or a close relation, perhaps a brother. May be they have some close ancestor in common. Perhaps this boy and Philip are of the same baby father. Where does that leave Charles in this whole affair then?

For those who doubt that the painting probably features Charles and his pageboy, here is a portrait that seems to confirm it. Dated 1891 though, it could be a copy or be based on some historical records of the event, 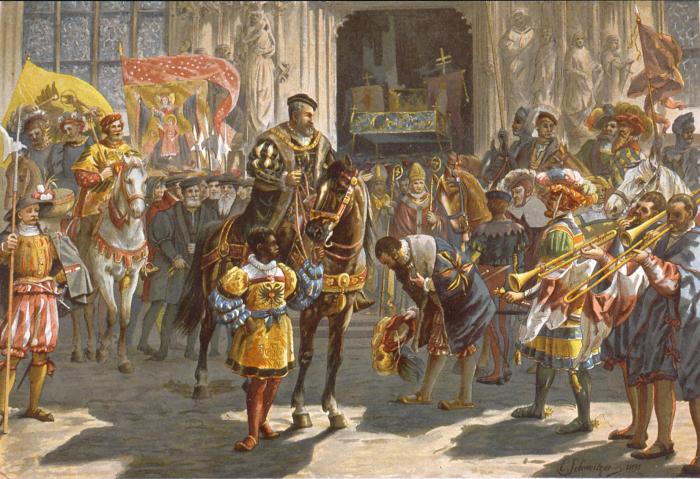