Queen Victoria's Black Grandmother In The Closet (and Other Stories) 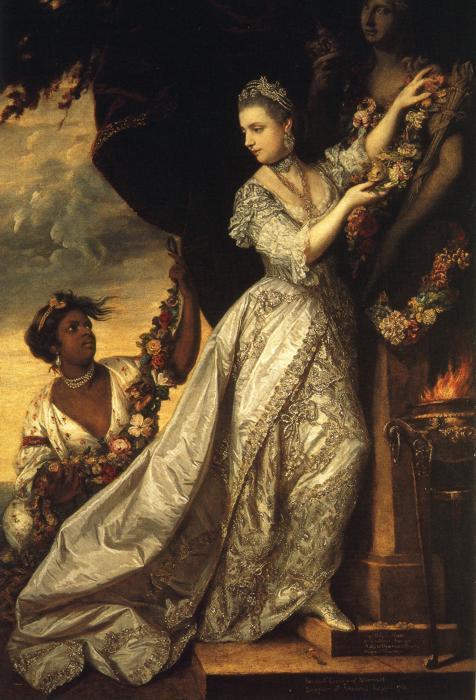 Quora
Readers with an interest in art depicting black people in Europe before the modern era may have come across this image showing what is apparently a black servant passing on some flowers to her white mistress. The painting is usually titled Lady Elizabeth Keppel, the full title being Painting of Lady Elizabeth Keppel adorning a Herm of Hymen by Sir Joshua Reynolds, a point whose significance I will come to later.

What I find so surprising about this painting is the fact none of the experts and scholars in the art world seem to have cottoned on to the fact that the happy couple in the painting are King George III, portrayed as Hymen, and Queen Charlotte, apparently playing the role of a servant. Or have they, and have none been willing to risk their careers by highlighting an politically inconvenient truth? Perhaps they have been waiting for it to be discovered by some raving afrocentric so that they can wash their hands of the whole affair.

On the hand they may have kindly deferred, to allow a mildly eccentric, eurocentric African noble with Habsbourgeois pretensions like myself, to discover it and establish his credentials as an art buff and a scholar on matters royal, and cement his reputation as a bit of clever a git and a pundit.

The painting commemorates the role of Lady Elizabeth Keppel as a bridesmaid at the wedding of King George and Queen Charlotte, a point made in *Latin at the bottom part of the drawing. Could it be any subtler? Common sense says that in a painting commemorating the subject's role as a bridesmaid, the happy couple in the painting must be the bride and the groom and yet everyone seems to have missed it. Have the experts been so blinded by the sight of the black woman in a subservient position that they haven't been able to see through the artifice?
The god Hymen is quickly and easily identified as a young King George. Well then, to paraphrase Sherlock Holmes, if the hitherto unidentified male in the painting can be positively identified as King George, then the unidentified female however improbable it may be, must be Queen Charlotte.

Take a look at the painting and see how they are posed. The servant is apparently looking up at her mistress, who rather than looking down at her servant, appears to be looking above her. Picture an imaginary line drawn from the eyes of the servant through the eyes of the mistress and beyond. You see the line go right through the crown and passing through to the god Hymen (this is easier seen in the monochrome prints). A closer look at the hand holding up the garland to the mistress shows that rather than holding the garland in unison with the other fingers, the servant's index finger is actually pointing at the space above her head. 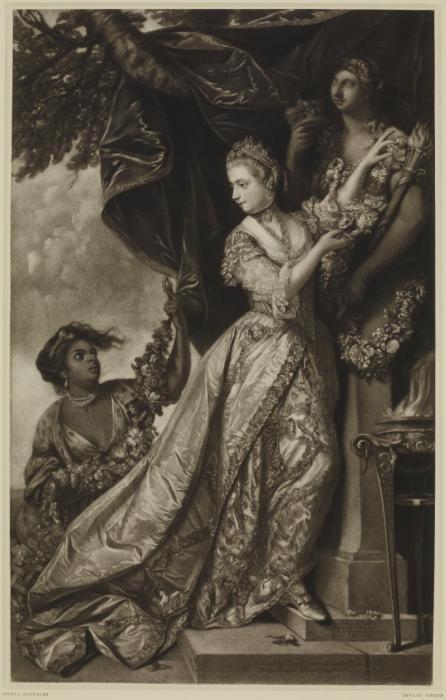 What is apparently a depiction of a black servant looking up at her white mistress is actually Queen Charlotte looking up at her husband King George and the crown he is holding, her crown, with her finger in a beckoning motion to King George indicating that the crown in his hand belongs atop her head, not that of the trollop in front of him.

For a painting created so soon after the marriage of King George and Queen Charlotte, with prints out in the open, it is hard to believe that it was never recognized as the time being one of King George and Queen Charlotte. My belief is that it was such, and was viewed as such and that in subsequent years as a result of some official or unofficial policy its true meaning was downplayed and simply silenced by the art establishment. It is probably as near an official painting of Queen Charlotte displaying her true features as one could get.

The portrayal of Queen Charlotte as a true black woman, rather than the white woman with visibly negroid features she is usually portrayed as comes as a surprise, and the complexion displayed could be a device to highlight her black roots. There are those though, who believe that she was dark-complexioned enough to be described as black rather than mixed race. I'll grant her complexion may have been that of a mixed race, but I believe the physiognomy depicted in the painting are her true features.

The painting raises the question of why Lady Elizabeth Keppel, a servant or subordinate to the queen, would commission a painting interposing herself between the King and the Queen with the Queen in a subservient position. That would be insulting and disrespectful, a display of ingratitude, and out of touch with any kind of manners or protocol. There is also the question of how wiser members of family would not dissuade her from such a act, and she could obtain the services of Joshua Reynolds who had painted paintings of high-ranking members of society including the Duke of Cumberland, in such an enterprise. (I have learned later that the painting was commissioned by her brother George Keppel) 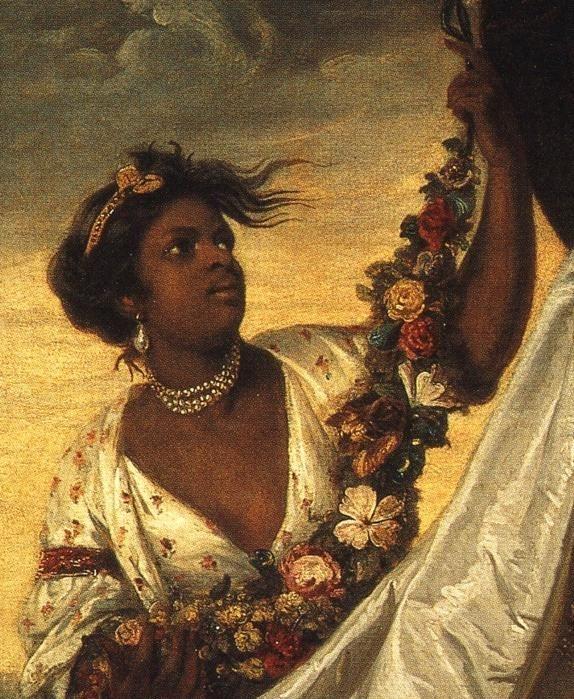 It is an official painting of Queen Charlotte, depicting or alluding to her true nature, as opposed to the other also official paintings, which avoid displaying traits that leave doubts about her true racial makeup.

There are those who believe that many of the paintings of nobility on show displayed much darker complexions, and have had the complexions lightened up in the process of "restoration", that some of them are fakes or have been replaced with fakes.

Having come to the conclusion that it is a painting of the Queen, we can reinterpret the elements in the painting and void the notion that Lady Elizabeth Keppel and Joshua Reynolds conspired to demote the Queen. It was my original impression was that Elizabeth Keppel's stance was rather odd, especially the manner in which she avoids "looking directly at the camera". She is averted from the statue of Hymen, who is the supposed object of her attentions, nor does she appear to engage her servant properly, looking above the servant rather than directly at her.

Once you understand that the whole purpose of Elizabeth Keppel's stance is to avoid interposing herself between the King and the Queen, literally and figuratively, everything about the way she is posed makes sense.

Consider these elements in the image:

If any these points were otherwise, the proximity of her face to Hymen, together with the crown in his hand would give the impression that she was being intimate with the King, and preparing to receive the crown in Hymen's hand on her head. That would be a big no-no.

Some commentators have stated that she is turning back to show of her beauty and her jewellery, but she could just as well be looking up at Hymen and showing the right side of her face, as though she was gathering the garlands up from her right to adorn Hymen.

Which brings us to what is arguably the most important feature.

Note how EK's right knee is pressed against the plinth, with the foot turned outward, and her left leg on a lower elevation. This stance basically locks her hip in a forward position, limiting her ability to right around to look down at the Queen. ie she is positioned such that were her eyes pointing downward, apparently making eye contact with the Queen she could arguably not be looking down at the Queen, because the Queen is not just behind her, but is well to her left and she is limited in her ability to turn to look at the Queen with her hip and knee in that position.

It is not impossible to look down at the Queen from that position, but it is rather awkward and not what one would normally do, and this is a very telling feature about the intent of the painting. 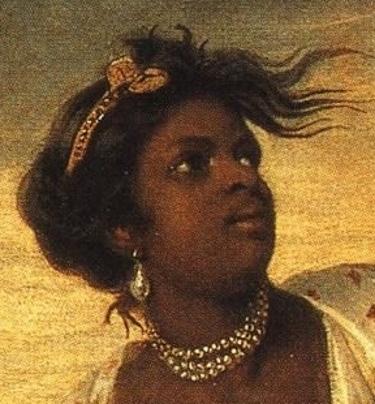 All in all, these points establish the true purpose of the painting, which considering the clearly deferential stance Elizabeth Keppel has adopted, George III in the shadow, that it is really a portrayal of a young Queen Charlotte not seen in the official paintings.

It may not be very obvious as most of the copies of this drawing on the net are of a low resolution, but when enlarged and observed closely, what one sees is a young black female looking up at her crown, what a 17 year old Charlotte Sophia looked like around the time of her wedding.

For those who may not know the late Princess Diana was a direct descendant of Lady Elizabeth Keppel, AND, Duchess Camilla is descended from her brother General George Keppel. Given the presence of the crown in the painting it looks like this is the scene where a marriage between one or more Keppel females and a future King was arranged.

Prince or no prince it looks like a dude just can't escape his destiny. Charles was definitely not going to wriggle out of this one.

There are some claims that Duchess Camilla is a second cousin of Prince Charles through her great-great-grandmother Sonia Keppel, believed to be an illegitimate daughter of King Edward VII. It figures she must be bound to have a bit of Queen Charlotte in her. The endogamous inclinations of our royals are ever manifest.

Upshot to all this - it looks like some years ago King George made a pact with the Keppel family that a Keppel female should wear the crown one day. As the saying goes, what great-great-grandpa and great-great-grandma put together, thou shalt not put asunder.

Promises must be kept. Camilla must be Queen. Charles's detractors put a sock in it.

On another note Lady Elizabeth Keppel's granduncle Baron Aarnout van der Duyn van Maasdam (the Keppels were of Dutch origin) is described as black and swarthy, A son teint noir et basané by Isabelle Charriere, meaning Elizabeth Keppel may have been not quite white. Yeah, it seems that there are blacks everywhere, even under the bed - one just cannot escape them.

Intrigued? Want To Know More? Read about The Case of the Broken Tiara and Britain's Georgian Uber Mohrs - The Mystery of the Mother of the Black Prince of Barbados.

On yet another note I remember seeing Prince Philip on the telly and thinking that he in some way reminded me of a Nuer or Dinka male, something about the shape of his skull, the set of his shoulders, the erect manner in which he stands, or some other feature. Has anyone noticed that Queen Elizabeth bears an eensie, weensie, fleeeeting resemblance to one Alek Wek of modelling renown? Not that I am saying that our royal family may be of some South Sudanese descent, just a point to note.

Why on earth am I even thinking in this manner and thinking improper thoughts about our Royal Family?

We ARE British and most definitely NOT racist.