Am I the only one to have noticed that the crowns on the head of the Moorish Kings are identical to the one on the Christian king? Were these Moors actually Muslims or were they Christians, or were they Moors who switched over to the to Christian side? This doesn't add up and it so obvious that one has to wonder why no one seems to have noticed it and mentioned it earlier. As they saying goes if you repeat something often enough people get to believe it even if it doesn't make sense. To me it looks like the heads are the heads of nobles or kings who were martyred for the Christian cause, not defeated Moors 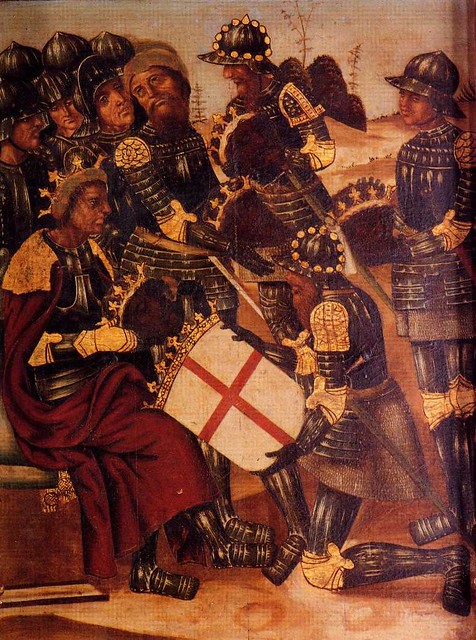 Perhaps a better way to explain may to find some four suitable Kings who died fighting the Moors, and if these heads may be a reference to them.

Here is a quote from http://www.hubert-herald.nl/EspanAragon.htm - Note how the author relates these moors to St Maurice, rather than Islamic moors

No emblem of the Aragonese is known from before 1281. In that year a seal was used showing a shield charged with a cross between four moor’s heads and within a legend meaning “The serpent has caused the curse, the cross has repelled it”.

The arms of Aragon, which probably had referred to these feudal obligations were changed by Pedro III by adding to the cross of the Ecclesia four moor’s heads in its quarters. These moor’s heads are the symbol of Saint Mauritius who was the patron saint of the Roman emperors since the time of the Ottones and later also of the Hohenstaufen. They also match the four estates (brazos) represented in the Cortes. By this addition, the cross of St George, the patron saint of the Ecclesia, was changed into the cross of St. Mauritius.

According to Sagarra in his Sigillografia Catalana these arms were adopted after a campaign under the command of Conrad de Llansa to Tunisia in 1279 to re-establish Aragonese suzerainty after the death of Muhammad I al-Mustansir (†1277) who had recognized the suzerainty of James I the Conqueror before.

Also, in 1281 Peter III armed a fleet to invade Tunisia again and applied to Pope Martin V to declare the expedition a crusade but, the Pope refused.

Maybe these expeditions were held with the (financial) approvement of the Aragonese parliament which was then rewarded with a coat of arms. However, no documentation about such a grant is available.

However, the quite persistent explanation of these arms usually is that the four heads represent the four moorish kings defeated at the Battle of Las Navas in 1212.

Seals bearing these arms were used in an almost uninterrupted series until about 1700. The legend on these seals was changed at the end of the 13th century when it was replaced by the second part of the royal title.

Related Pages:
Reappraisal of the Four Moors on the Arms of Aragon - Part 2